Landscaping (2006) Custom Electronics, Oil, Sand, Toys, Various Media
Exhibition with Jerel Dye
"This exhibition, titled Landscaping, was a general response to anxieties Jerel and I shared regarding war, information culture [especially modularized subjectivities and nature], and relationships between surfaces and infrastructures. As analogies, our surfaces were ‘cute’ and playful and the infrastructures a mixture of ideas and programmed systems."
Above: Floor Games (2006)
"After reading ‘Floor Games’ & ‘Little Wars’ by H. G. Wells I created this project as a loose reference to playroom games played as child. The project was also made in 2006, which was three years into the Iraq War."
The wooden floor is made from pine panels that were run back and forth many times across a shallow table saw blade. The small towers have a series of speakers that were processing sound while vibrating oil and sand. A toy race-car track is mounted to the ceiling and the tracks are used to power cell phone vibration motors, which are attached to toy plastic soldiers that were heavily modified/ reconfigured in the studio.
Above: Floor Games [sand doc] (2006)

Previous day NASDAQ crude oil prices [daily, future commodities] are averaged to seed generated tones in a series of speakers that vibrate. Two separate towers have five speakers filled with either sand or oil. The vibrations causes the substrates to spew slowly over the wooden city located at the bases
Above: Floor Games [oil celebration doc] (2006)

Several mutilated toy soldiers are frozen in an ice-skating position. Like a clock, they are constantly circling as if they are in a celebration dance, or game of chase. They are on 'black lake', which represents oil. Below them in the tower is 'red lake' surrounded by wind-up toy bunnies.
Above: Floor Games [arms doc] (2006)

The arms at the base of the Floor Games piece sweep along the wooden city below. A camera is mounted to the end of each arm, which is focused on a mutilated toy soldier. The signal from the camera is relayed to a small monitor embedded in the innards of an elmo toy at the top of the tower [see documentation below].
Above: Floor Games [Soldiers] (2006) Custom electronics, Toy Soldiers, Wood, Servos

This kinetic object is driven by NASDAQ crude oil prices [daily, future commodities ]. Averages are taken daily and divided into 25 modules representing days. The averages translate to speed and height variables that are reflected in the raising and lowering of blocks of plastic toy soldiers. The blocks of soldiers were melted together with a soldering iron.
Above: Park Emulator (2006) Custom Software, Wood, Modeling Grass/Trees, Projection
With Jerel Dye

A Max Msp/Jitter patch controls a camera that sweeps the horizon of landscape blocks. Changes in contrast along the horizon procedurally translate to 'park' sound effects [birds, wind, and so on] and a video feed. The individual terrains are covered model railroad grass and trees. 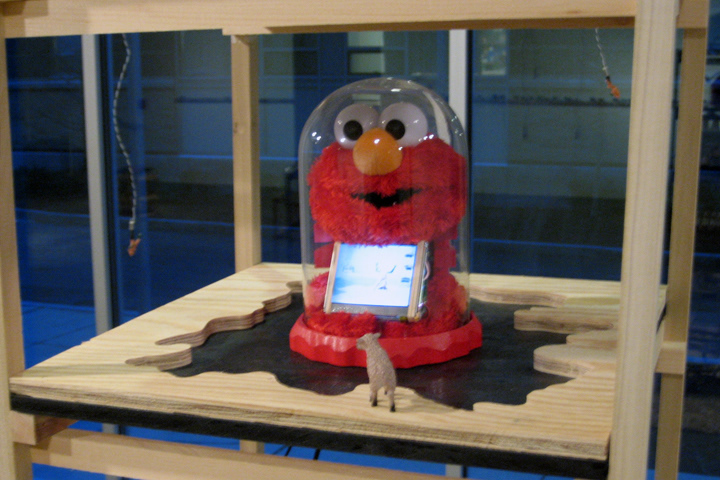 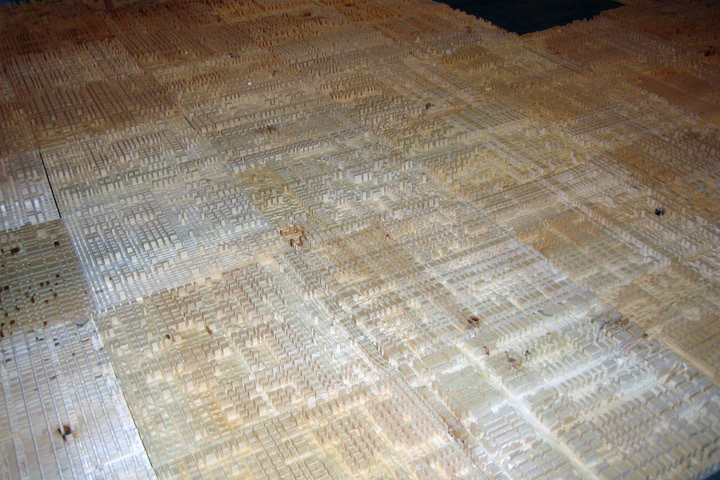 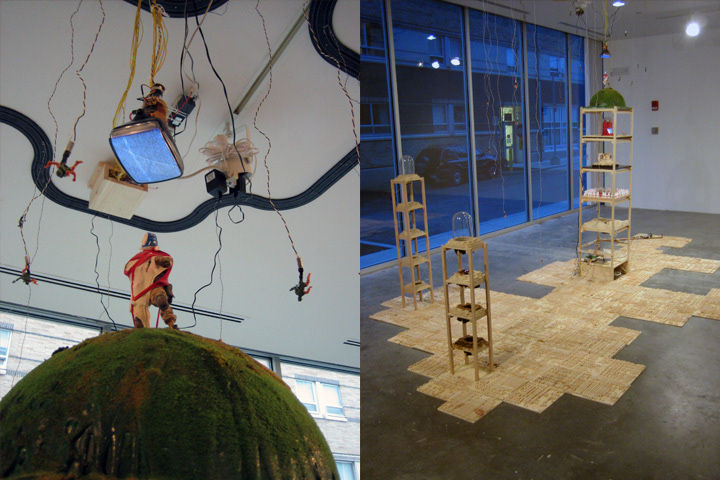 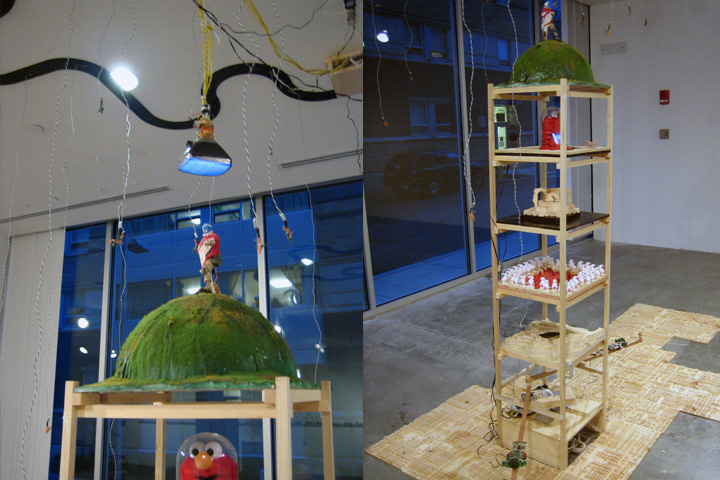 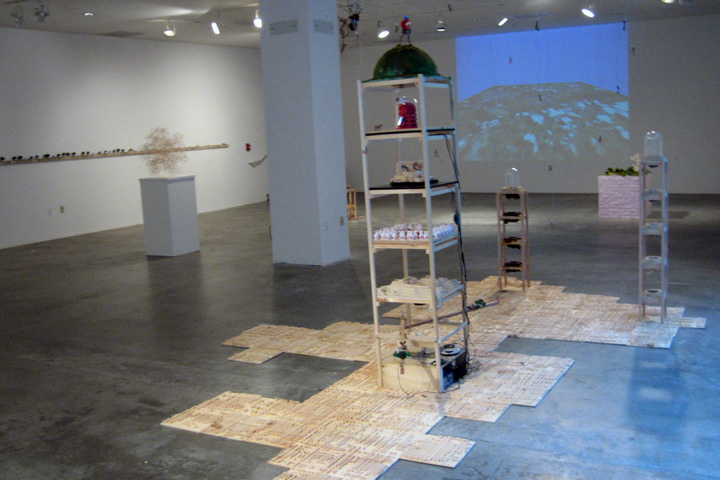 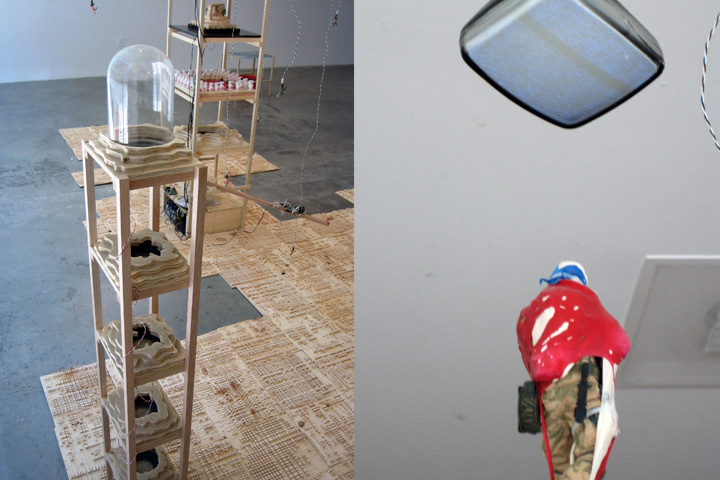 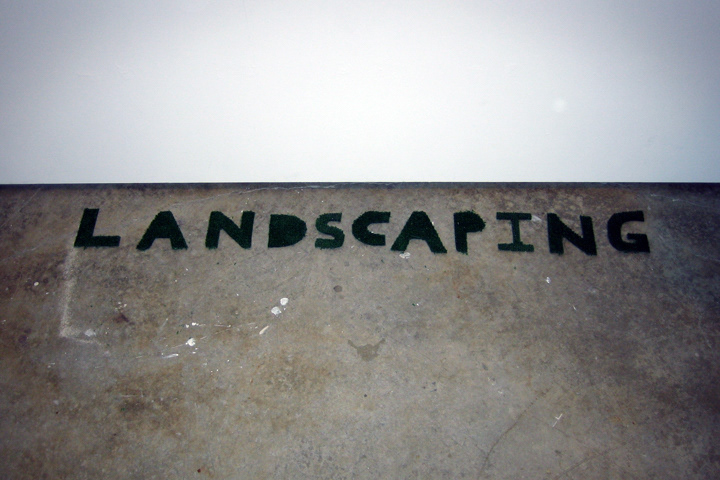 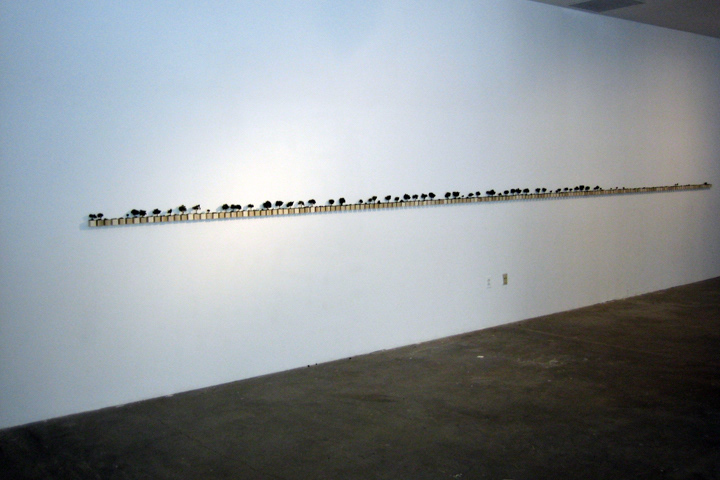 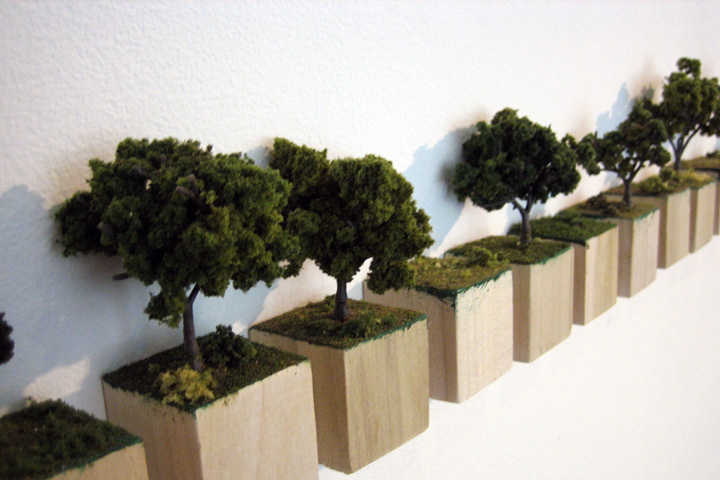 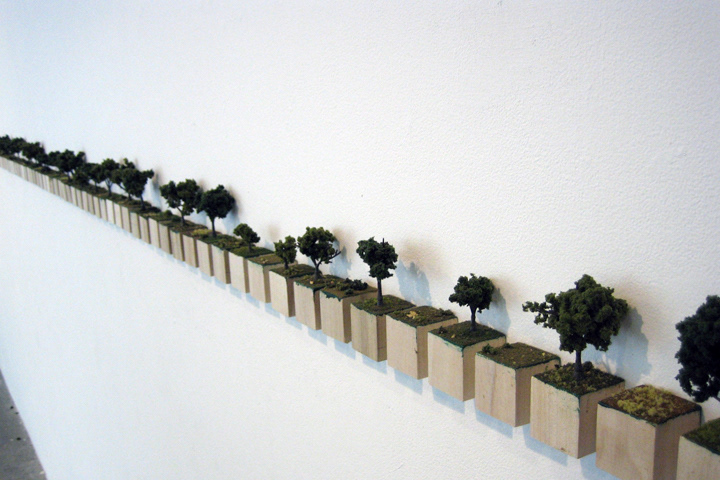 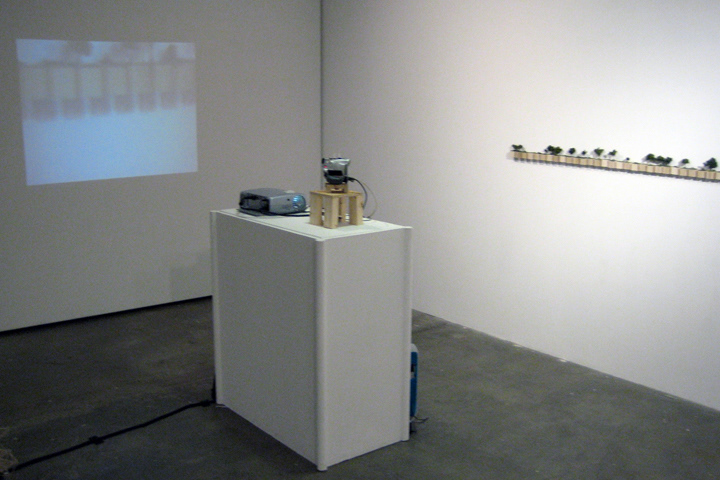 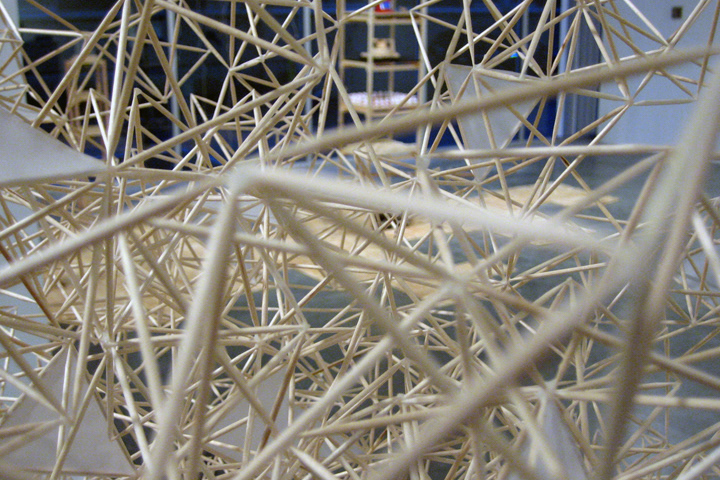 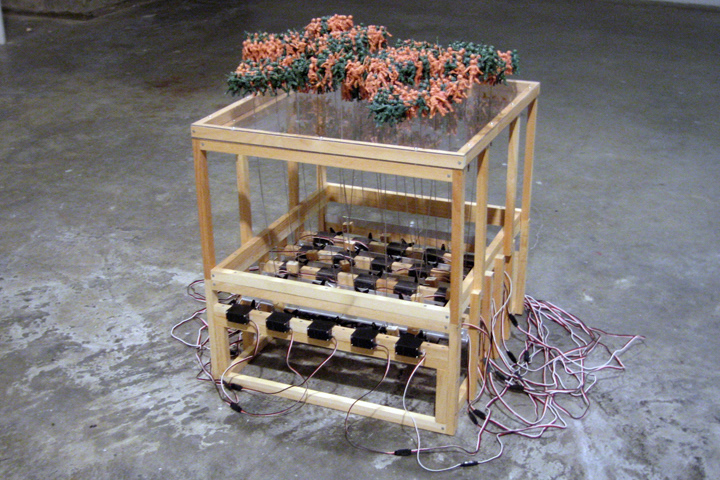 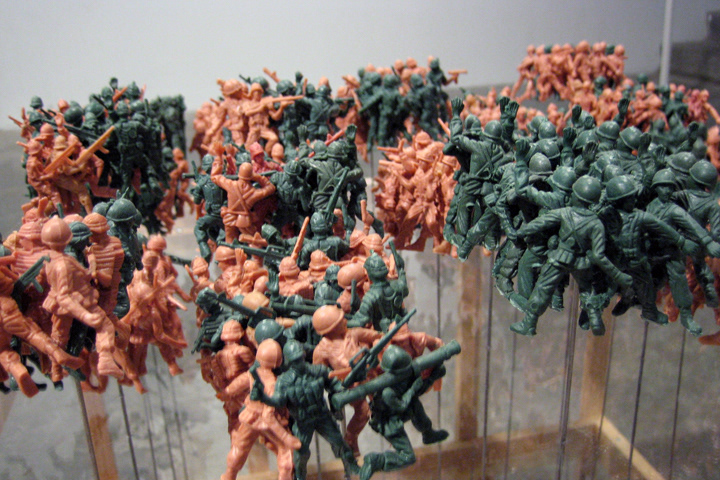 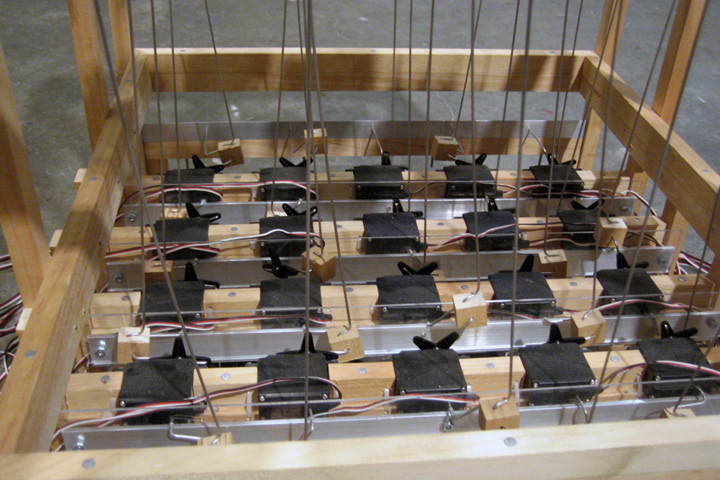 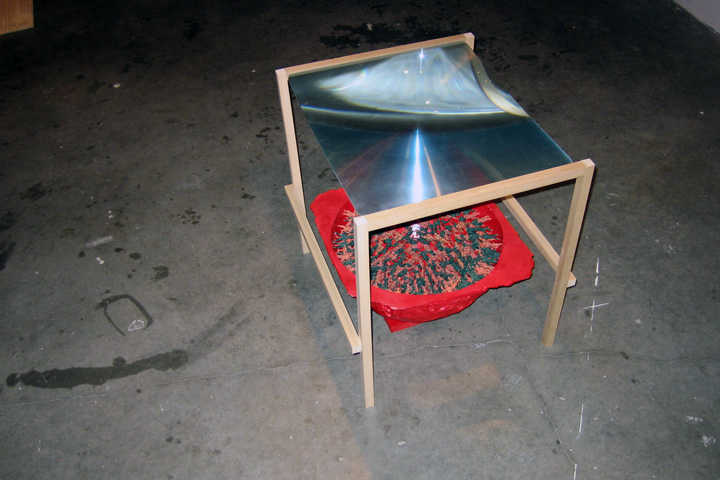 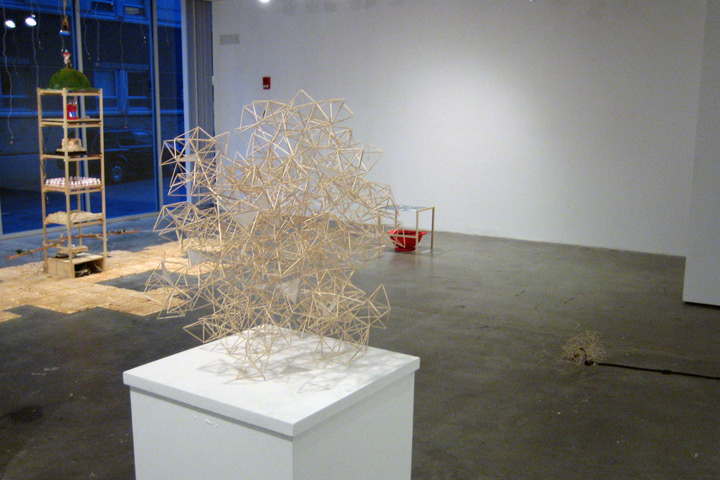 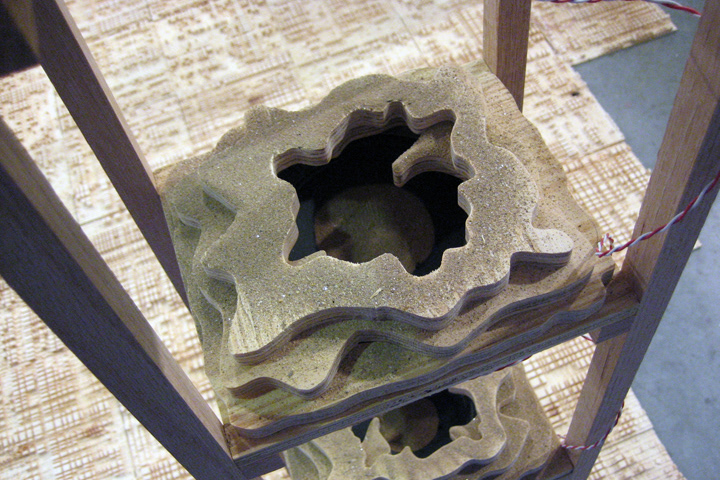 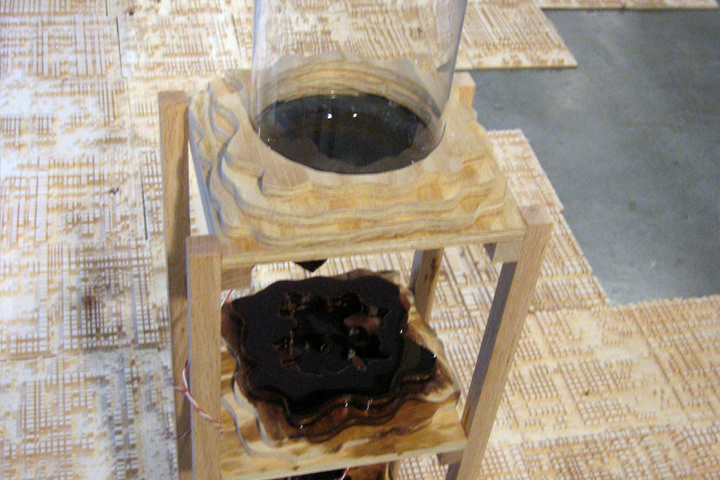 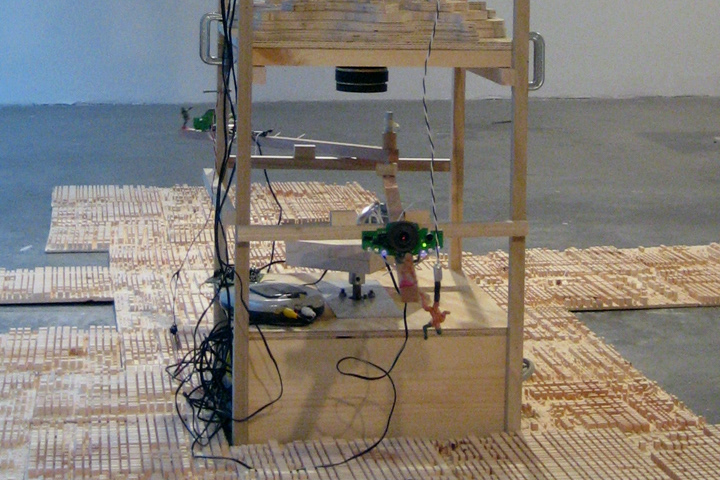 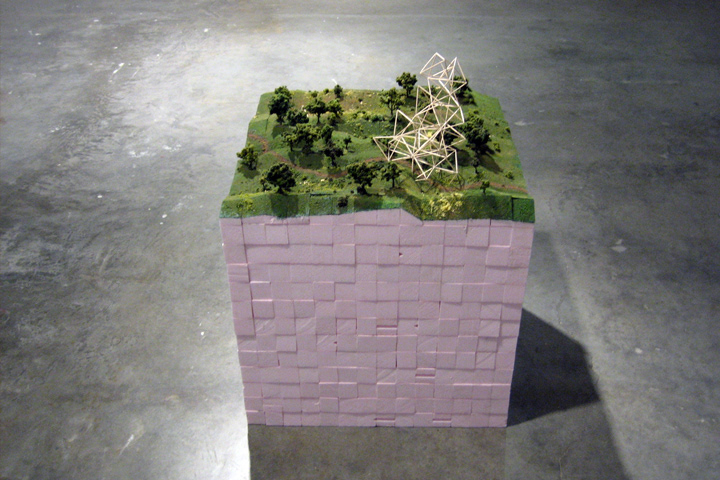